The bowhead whale, or Balaena mysticetus, is a species of whale that is mostly found in the Arctic and has faced a large decrease in numbers due to whaling and overexploitation throughout the years. Despite this, they are listed as Least Concern. These whales are also one of the largest species of whales in existence today in terms of weight, with the only larger species being the blue whale. Today the bowhead whale is also called with several other names including Greenland right whale, Arctic whale, polar whale, steeple-top and Russian whale. Most of these names are due to their location in the Arctic and other nearby locations with a similar climate.

The bowhead whale is black (with the exception of a whitish area on the lower front jaw) and is usually between 15 and 18 meters in length although one whale of this species has been measured at 19.8 meters. Adults will usually weight between 75 and 100 tons (150,000 to 200,000 pounds) but at birth they are around 2,000 pounds. One of the key physical features of a bowhead whale is that they have baleen plates instead of teeth which are used for feeding. In addition, they are easily distinguished from other whale species by their large, symmetrical skull which is around a third of the whale’s entire body length. This is one of the species that does not have a dorsal fin.

As mentioned earlier, most of the bowhead whale population in the world is found in the Arctic although they can also be found in the seas adjacent to the area, including the higher latitudes of the Northern Hemisphere. While they spend most of the year in the icy areas of the Arctic (near the point farthest south with pack ice), they will generally spend the summer in the northern adjacent seas as these are mostly ice-free. There are five different stocks of these whales, three of which are found in the North Atlantic and two of which are in the North Pacific and around 10,000 members of the bowhead whale population throughout the world.

You are most likely to find a bowhead whale either by themselves or in a small group of 2 to 3 members. Despite these generally small groups, larger groups are sometimes formed during migration. One behavior that is unique to this species of whales is that they will use their exceptionally large head to help them break through ice, especially thicker pieces. They also share several of the common behavior patterns with other species of whales, including diving and vocalizations, especially when on migrations. Although they will dive for around an hour, the dive will usually be broken up into smaller bits lasting up to fifteen minutes. 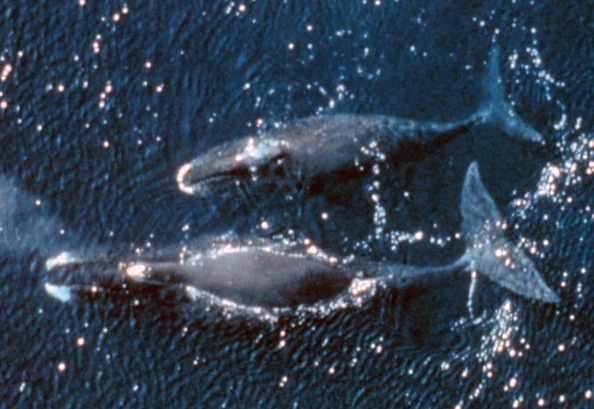 As mentioned earlier, the bowhead whale is one of the species of whale that has baleen instead of teeth. This baleen is designed to filter their food from the sea water. To feed, they open their mouth and are able to use their baleen to separate their foods source, zooplankton (such as mysids, copepods and euphausiids), fish and other invertebrates from the water. Because of their physical structure, they are able to complete this filtering process while swimming. Scientists believe that each one of these whales consumes around 100 tons of crustaceans every year. Generally when feeding, they will do so in larger groups (up to fourteen) and do so in a V-formation.

The bowhead whale usually reaches their sexual maturity around 20 years of age at which point they have reached their adult length. Once they reach this age, females will usually give birth to one calf each 3 or 4 years, with the reproduction occurring in late winter. Because whales are mammals, this species carries the calves in their uterus for a gestation period (of between 13 and 14 months) and will then give birth to them. Generally when born a whale calf of this species will be around 4 meters long and weigh around 2,000 pounds. After giving birth, the mother will nurse the calf for anywhere from 6 months to a year.

Although the bowhead whale is considered a Least Concern species, they are considered endangered by some organizations. The largest threat that has lasted throughout their history is hunting as both the thick blubber and long baleens are desired by certain groups. They were also hunted until the previous century for commercial purposes such as oil and meat, but are now protected in a large number of countries. In addition to these long term threats, the species is also experiencing several newer ones that have come with advances in technology, such as habitat loss and the spilling of toxic chemicals into their waters. There are several organizations, however, working to fight these newer threats.