Whale Reproduction and Care of Young

Male whales are mature between 7 and 10 years of age. They have a cavity that their genitals remain in during resting and swimming so there isn’t a great deal that is known about them in great deal. For females maturity occurs about 5 to 7 years of age. A female that is mature will generally have a new calf every 2 or 3 years.

Females often have many partners during the mating season so it is highly likely that she will conceive. Since she will only have one baby and then nurse it for a full year, the rate of reproduction is less than with many other forms of aquatic life. However, young whales tend to have a very good chance of surviving to their own maturity. The fact that the only predators that whales have are humans also helps with their survival rate.

Generally the pods of whales are relaxed and friendly in nature. However, when it is mating season the males will be competing for the females. As a result there can be a great deal of tension that develops within a pod during that period of time. They may battle each other for the right to mate with a given female. However, there is usually no real harm done to each other and death very rarely occurs. The goal is to determine who is stronger as that whale will get the chance to mate first.

Female whales are very receptive to the courtship from the males during the mating season. They love the songs and the calls that they get. They also enjoy the touching that is very soft and even what many view as caressing during this period of time. However, after a male will mate with the female he is likely to go off and take care of other business. The females long for that type of interaction again which is why they are more willing to mate again and again with different males. 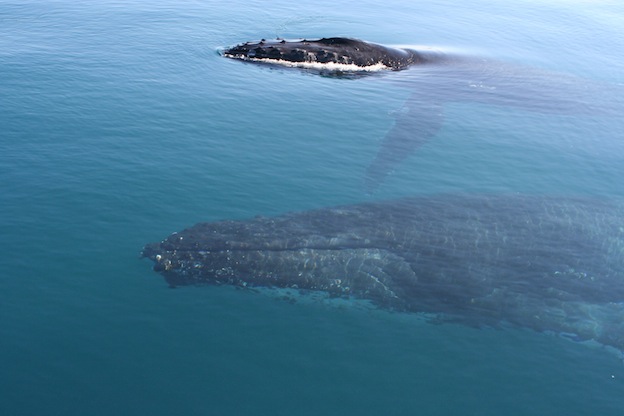 During this mating season you will also hear changes in the calls and communications among the whales. Part of that change has to do with the fact that there is so much stress involved in the group. The rest of it has to do with mating calls. You will often find that males will come to other pods for the chance to mate with their females. This definitely helps to reduce inbreeding among these mammals as well.

All whale calves are born live. As whales are mammals, calves grow inside their mothers. The calves are born with their fins emerging first. The offspring are born during the migration process in most instances. Since the gestation period ranges from 10 to 16 months, it will depend on the type of whale you are looking at. It will also depend on how far they migrate and what their migration time frame is.

The size of a whale calf will depend on the species and the size of the mother. A general guideline is that the calf will be about a quarter of the mother’s length. This can mean some of the larger offspring such as those from Blue Whales will be bigger at birth than other whales will be when they are fully mature.

While whales don’t reproduce early in life, the often live a very long and healthy life. Research shows that whales can have a life span between 40 and 100 years. That is significantly longer than most other forms of aquatic life out there. They are classified as mammals based upon how they reproduce, the fact that they have live young, and the mother’s nurse the babies.